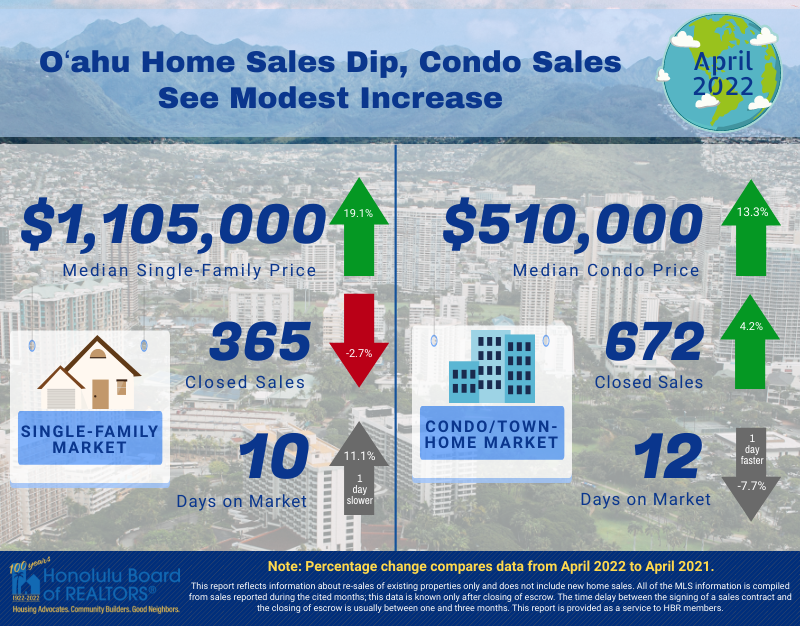 “As interest rates rise and financing becomes costlier, we saw pending sales begin to slow and a slight dip in month-to-month median prices in April,” said Chad Takesue, president of the Honolulu Board of REALTORS® . “Still, high demand and low inventory continue to drive competition and put upwards pressure on sales prices.”

“Most properties sold in April were in escrow before mid-March, while 30-year fixed mortgage rates averaged below 4 percent before the swift spike to the 5 percent range,” added Takesue. “As we face challenges in housing affordability, we should look closely at how we can work together to increase housing inventory at all levels, so homeownership is possible for everyone in our community.”

New listings for single-family homes dropped slightly, down 7.6% year-over-year, while the condo market saw a slight increase in new listings, up 2.3%. New listings for single-family homes fell short of last April, with the most significant declines occurring in the Diamond Head region, Pearl City, and Hawai‘i Kai. In the condo market, new listing volume in the $300,000 to $399,999 price range saw the sharpest decline, down 33.8%, but there was a significant increase in listings priced at $700,000 and above, accounting for 28.5% of the month’s new listings; and volume up 64.8%.