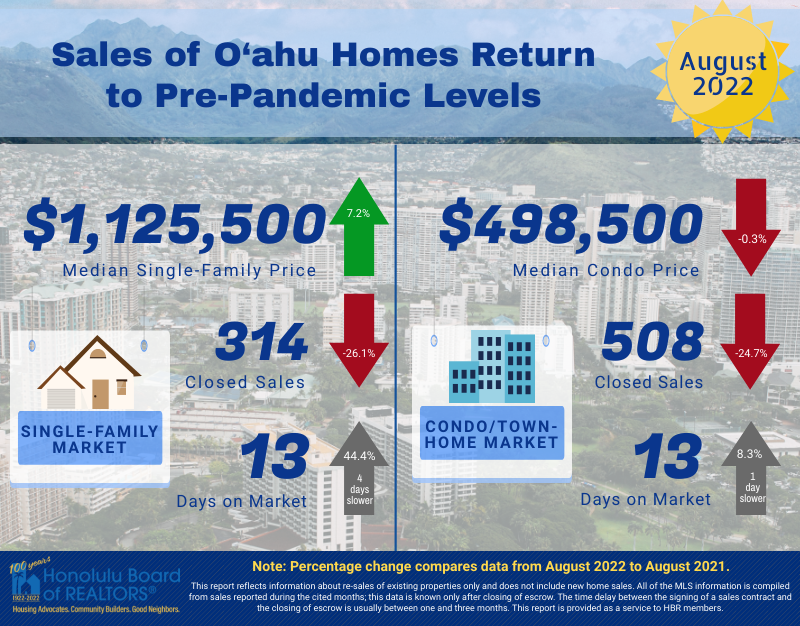 “As market activity continues to slow with the rise in interest rates, it’s important for buyers to remember that homeownership is still possible,” said Chad Takesue, president of the Honolulu Board of REALTORS®. “More than 250 properties on Oahu, most of which were condos, sold for under $500,000 last month.”

Nearly half – 48.7% – of single-family home sales closed below the original asking price compared to 22.8% a year ago. By the end of August, 13% of the newly listed properties had undergone a price reduction, compared to 4% in August 2021. Of the total active inventory at the end of the month, 38% of single-family homes had experienced a price reduction at some point since being listed, compared to 19% of the active inventory one year ago. The Ewa Plain region accounted for the most price reductions at 23%, followed by the Diamond Head region at 12%, the Metro region at 11%, and the Kailua region at 10%.

“Following the frenzy we saw last year, sellers are working with their trusted REALTORS® to reevaluate how to price their homes as the market cools off. Our data indicate that fewer properties are selling at a premium, and price reductions are rising,” Takesue added.

The condo market saw sales decline across all price points and in various neighborhoods. By sales volume, the Metro area was hit the hardest with a 28.8% decrease in sales compared to a year ago, followed by the Kāne‘ohe region dropping 42.9%, the Central area dipping 25% and the Ewa Plains falling 16.9%.