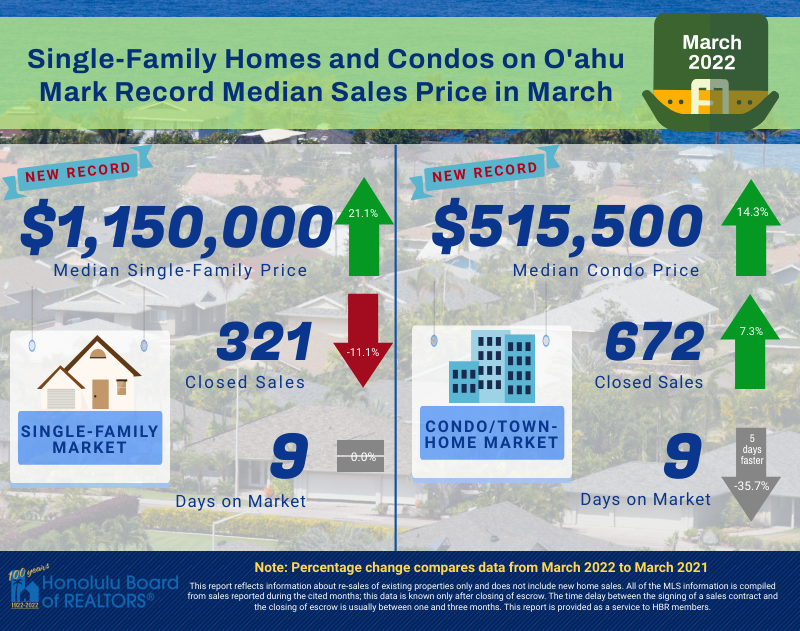 Fewer single-family homes were sold in March and the first quarter, with the most significant decline occurring in the $899,999 and below range, down 56.3% with just 70 closings in March. On the other end, the luxury single-family home market is picking up with 27 single-family homes sold in the $3 million and above range, marking a 68.8% jump year-over-year. In the condo market, sales in the $700,000 to $799,999 range recorded the highest volume increase, up 125.8%, with most of these sales occurring in the Metro and Ewa Plain regions.

“More luxury sales coupled with declining affordable inventory and sales are pulling the median price upwards in the single-family home market,” said Chad Takesue, president of the Honolulu Board of REALTORS®. “It’s no surprise that rising prices are pushing more prospective buyers to consider condos, driving the steady and strong demand we’ve been seeing for these properties.”

Several regions across O‘ahu marked a boost in single-family home sales in the first quarter, including Waipahu, Hawai‘i Kai, and Leeward, up 50%, 18%, and 16%, respectively. The largest declines in this market occurred in the Diamond Head and North Shore regions, down 22% and 36%, respectively.

In the first quarter of 2022, 58% of single-family homes sold above the original asking price, up slightly from 52% in the first quarter of 2021. Similarly, approximately 42% of condos sold above the original list price compared to 29% in the same period last year. In both markets, properties sold in March were on the market for a median of nine days.

“Bids over asking and a brisk market pace driven by demand for housing are now the market’s status quo, even as average mortgage rates have begun to rise gradually,” added Takesue.

New listings for single-family homes continue to lag behind last year, with 412 new properties listed in March or a 6.2% dip compared to this time last year. Buyers scooped up the inventory quickly – approximately 56% of those new listings were in escrow or sold by the end of the month. New listings for condos were on pace with March 2021.